If you are a male, compare yourself to the following pictures: 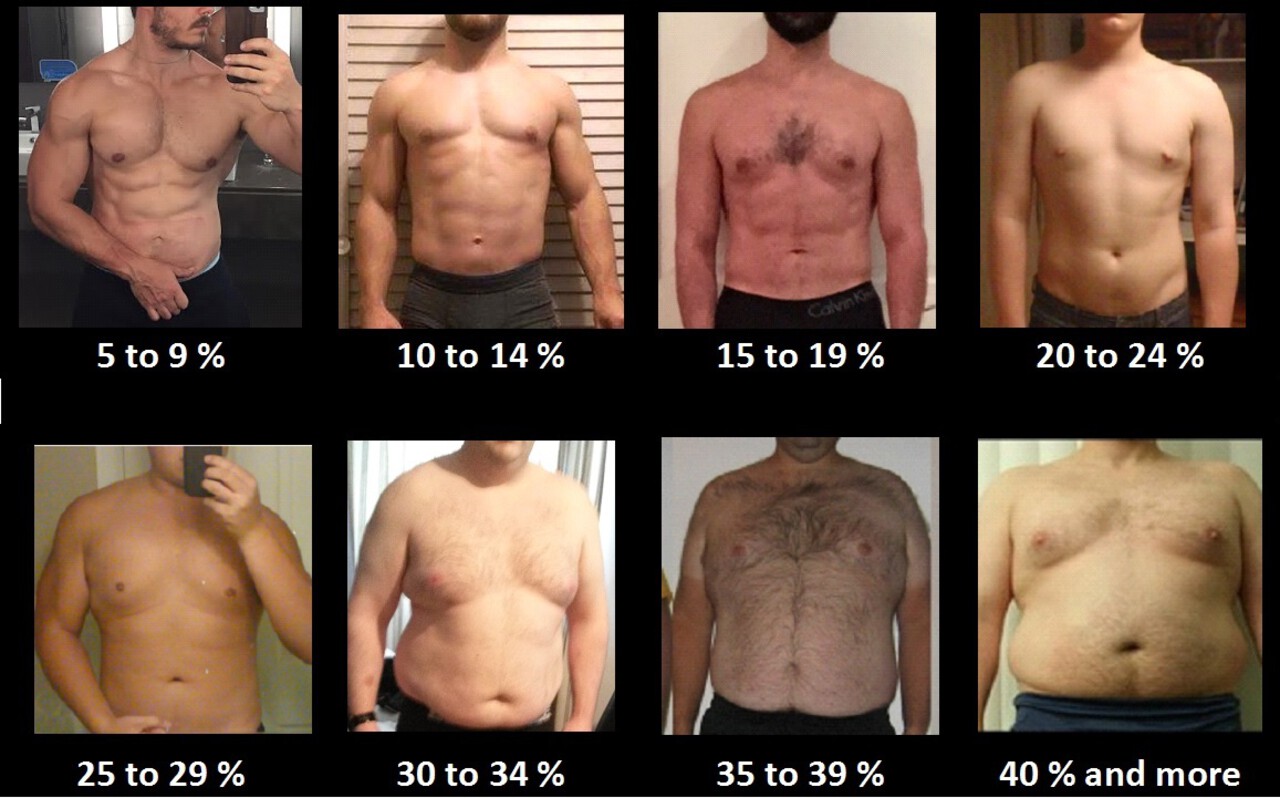 If you are a female, use these: 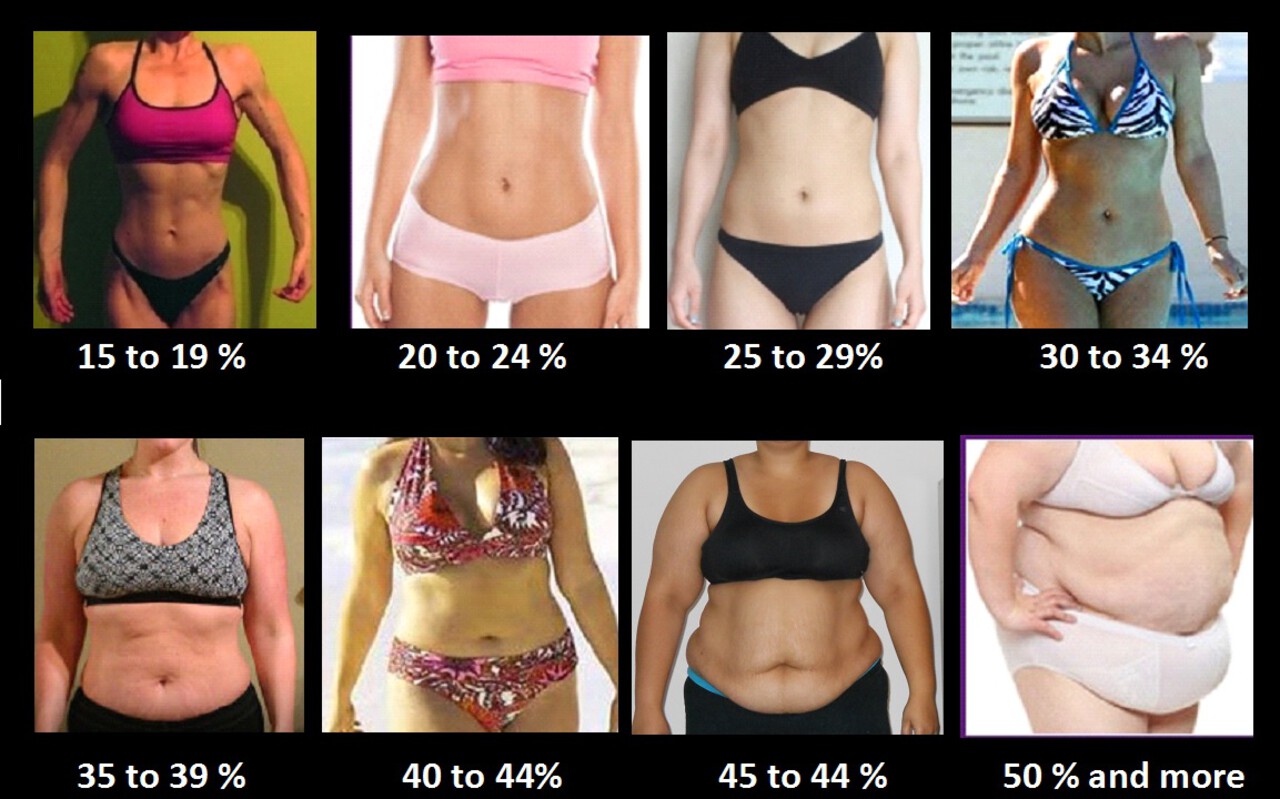 Determining your body fat percentage is relevant for several things. Not only is it necessary in order [to figure out how many calories you should eat](/how-many-calories-do-you-really-have-to-eat-free-calculator/" target="_blank), it's also a very good indicator of how fit you are - way better than the useless BMI, which some old school doctors still use.

There are several ways to come up with an estimate however, but most of them are rather useless. Let's check them out. 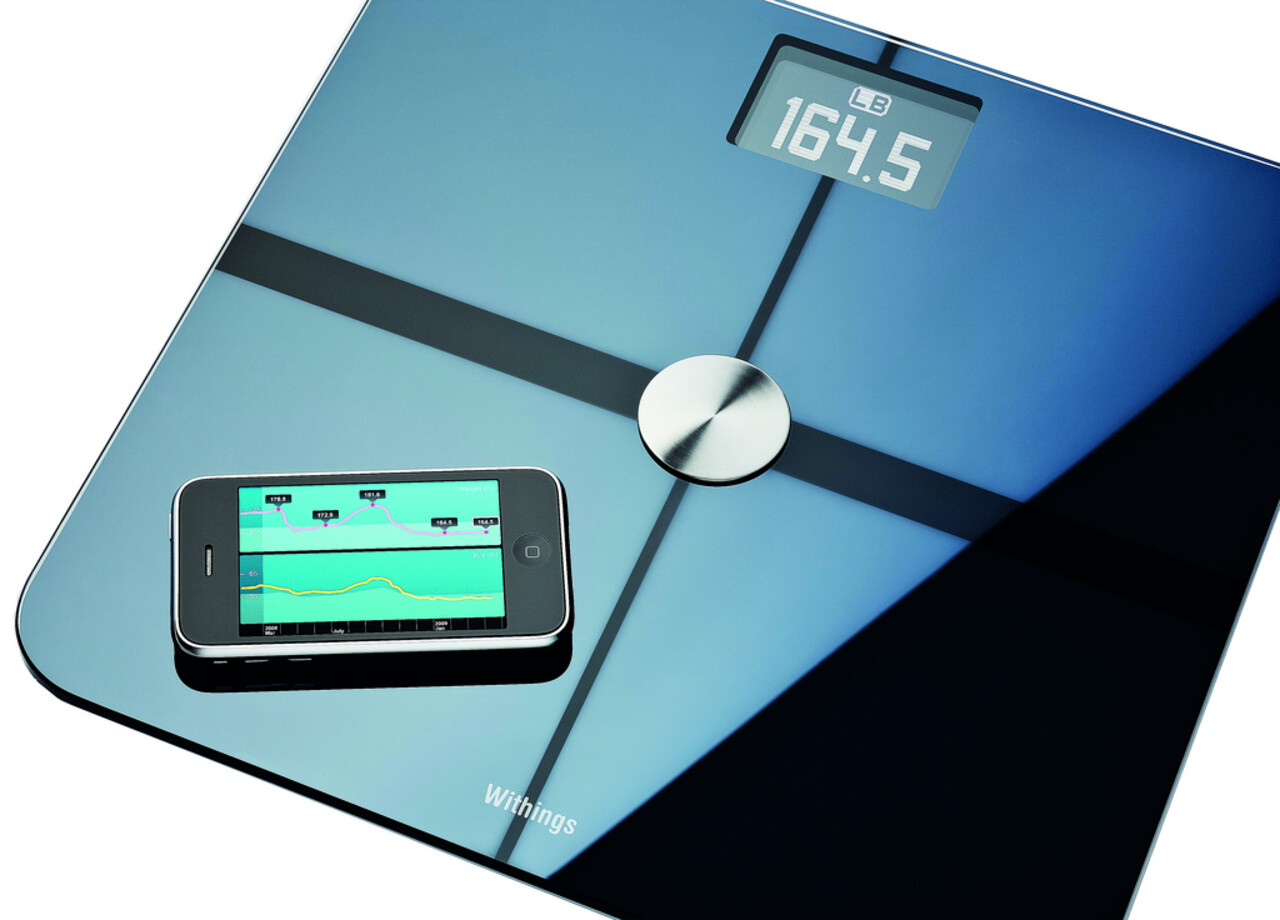 Newer scales have a feature to determine your body fat percentage. Don't use it! It's not just inaccurate in general, but also changes within it's inaccuracy, which means you can't even use it to see a trend.

Scales use a electric impulse that is send through your body. Based on the time it takes to get back to the scale, your BF is calculated. But not only body fat and muscles change the outcome, also simple stuff like the amount of water you drank.

On top of that, the measurement in itself is usually wrong and off by at least 5%-10%. SKIP!

The reason we used pictures as the recommended way is: it works and is good enough. If you are honest to yourself, you'll get close to your real percentage range. Plus it's free, quick and you don't need any equipment.

Everyone is different, so 15% on a male can look quite different on another male, but it's close enough. There's no way you look like 15% in the picture above but actually have 25%. Which could be the case with other methods!

Keep it simple. Use pictures and the mirror. 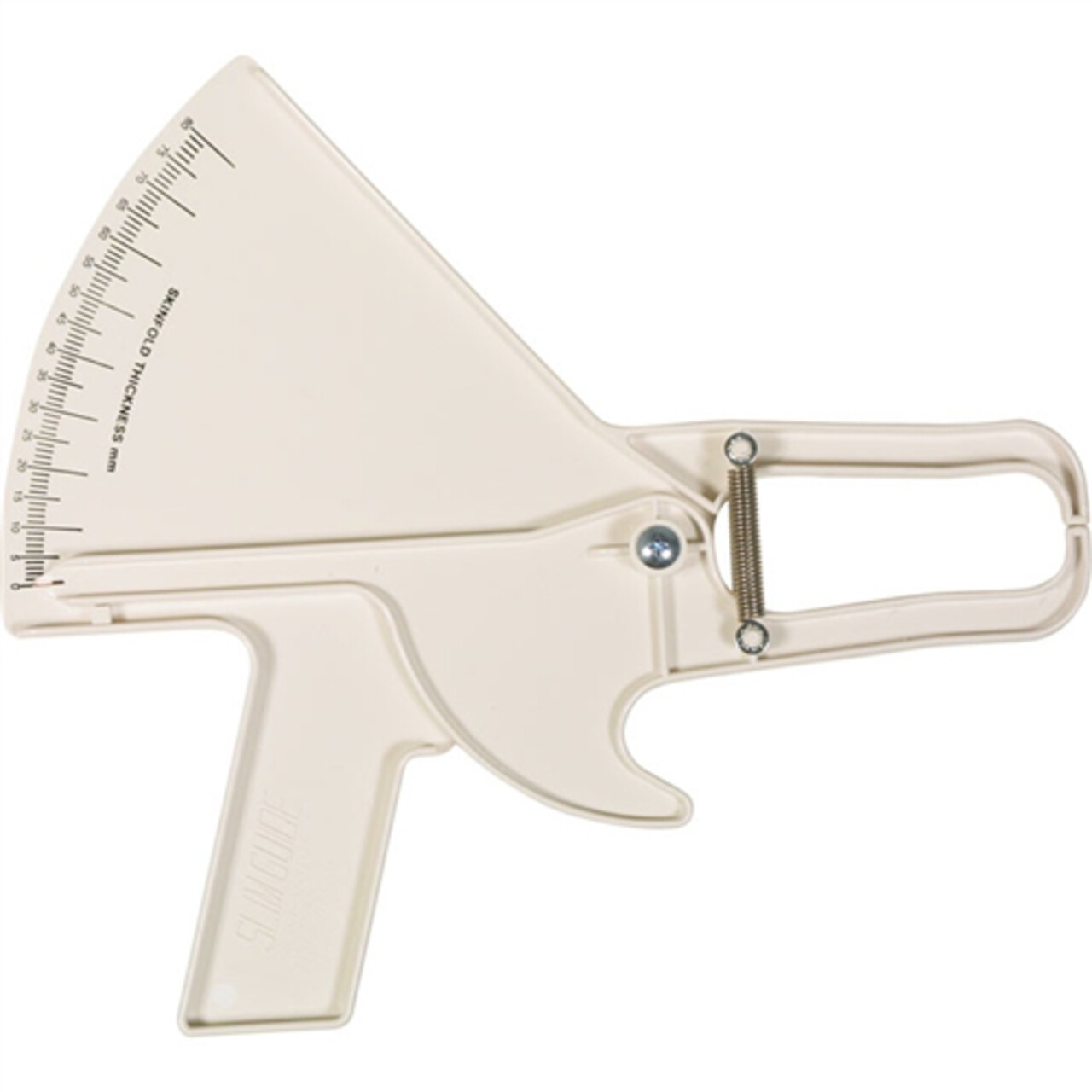 Calipers are a cheap way to measure your body fat. But, the cheap ones are not very accurate and the "real" ones cost north of 200 bucks.

Furthermore, the formulas used to calculate the body fat percentage, based on the measurements taken, are flawed. For instance, regardless which formula I use, they say I'm at 5% BF all year around. Some even said 3%, which is basically almost dead.

Even with a huge amount of margin, I could never get above 10%, even though I clearly was at least at 15% at the time.

Not to mention the fact, that most calipers don't have a decent way to determine if you pushed too much or not enough. So even the measurements taken can be off by several millimeters, even when done by the same person! 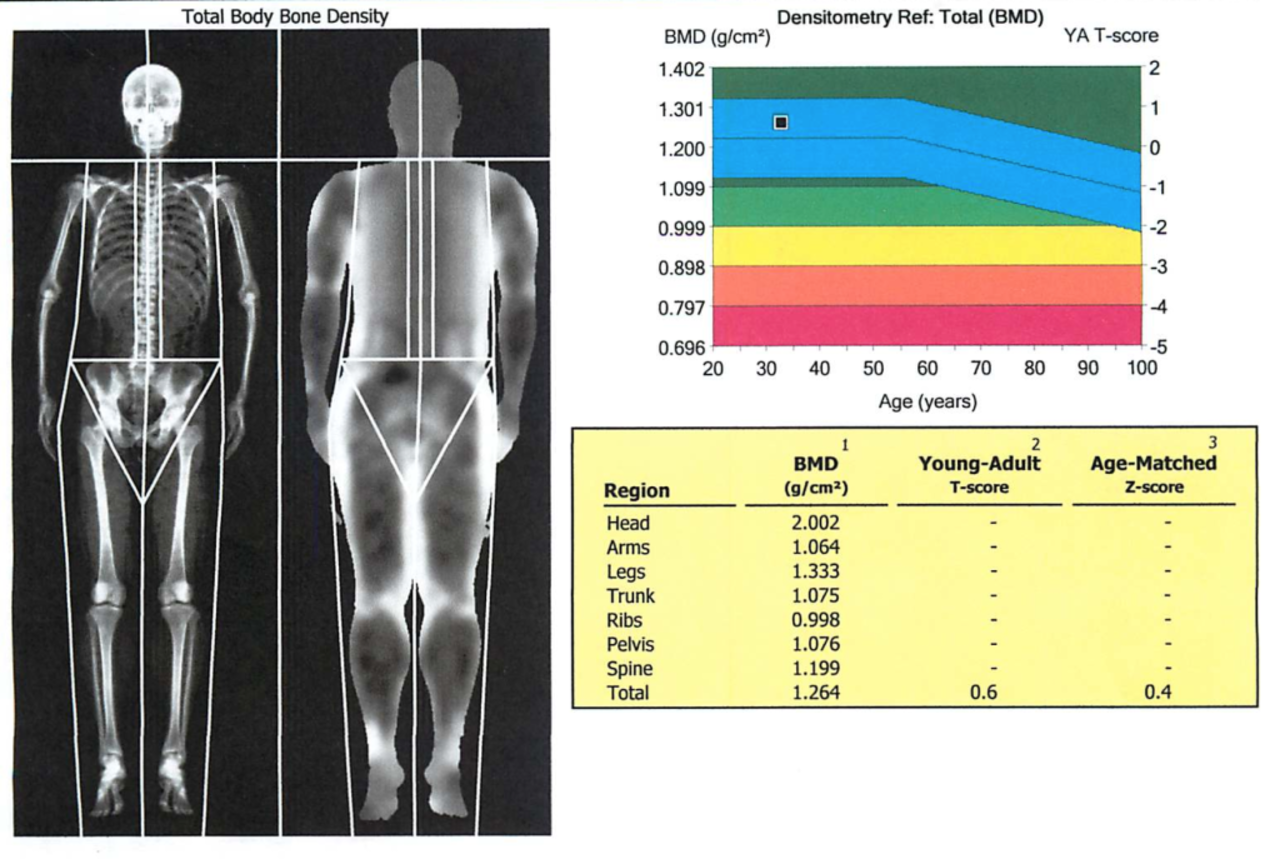 Now this one is interesting. A DEXA scan can be done for roughly 50-75 bucks and is very accurate. It literally scans your body for bones, muscles and fat. You even get a picture of your body, showing you where you have your fat.

But it's obviously not super cheap and you need to find a place who administers such a procedure. Smaller towns, especially in Europe won't offer a DEXA scan.

And even with this, you can get wrong-ish results, because every machine is different, every procedure is administered differently and so on.

However, if you have the money, the time and the option, go ahead, it's certainly the best way to measure your body fat with current technology and the body image is funny too.

Check out this video, if you want to see the difference in body fat percentages, in relation to fat distribution, measured by DEXA scans:

To look athletic, men should be between 6 and 15%, women between 10 and 20%. But, the lower ends are only sustainable for a few days and should not be considered a goal unless you want to compete on a bodybuilding stage.

This changes of course from person to person. Naturally lean people can get a bit lower without having side effects, but not much.

If you go below the healthy thresholds for too long, you'll experience side effects. Apart from non-visible issues (hormones mainly), noticeable problems are:

To wrap this up: essential body fat percentages for men are 3% and 8% for women. Below that you could literally die!

Lastly, your body fat percentage doesn't really matter. Again, to figure out your calories, it's necessary, but a picture-comparison works for that. Nobody cares about 100 calories more or less, especially because food labels can be 10% off (by law). So not even that is accurate.

Worry less about body fat and more about your diet, consistency and health!

Correlation between alcohol and fat loss

How to: read nutrition labels